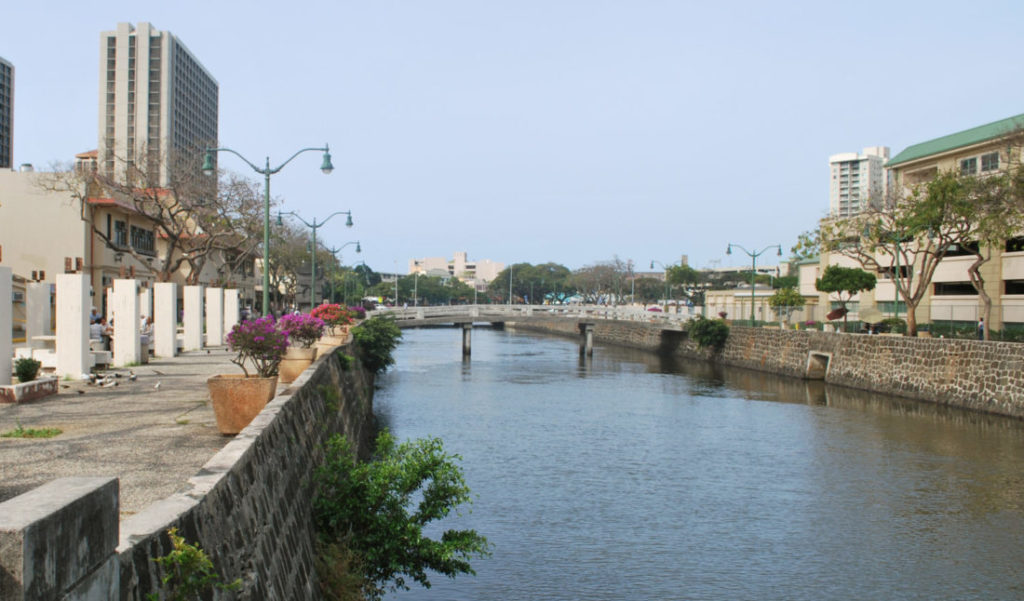 If your impression of Chinatown begins and ends at Hotel Street, you’re missing out on the allure of Honolulu’s most diverse and resilient neighborhood.

Exploring the streets and alleys of Chinatown, you’ll discover an exciting mélange of world culture. Certainly, the sights, smells and sounds of Chinatown are reminiscent of its far-eastern roots, but the area has also fast evolved the heart of Honolulu’s multicultural art, theater and gastropub, culinary destination.

The district’s roots are seeded in history, dating back to the 16th century when immigrants landed at Honolulu harbor looking for work aboard whaling ships, selling supplies to the seafarers or in the fields of the sugar plantations. Business establishments were soon established, including jewelers, cobblers, tailor shops, watchmakers, furniture shops and bakeries — all run by Chinese workers. Soon after the Chinese, Japanese immigrants came, followed by Filipinos and Vietnamese — to work, and each bringing new tastes and traditions with them. This preponderance of newcomers, most arriving from Asia, established a cultural foundation for what became known as Chinatown. Today, the neighborhood’s rich legacy continues as Chinatown evolves into the 21st century, sparked by a cultural renaissance, which has brought new life, trendy restaurants and art galleries to the area.

The Chinatown Historic District — the area between Honolulu Harbor, Nuuanu Stream, Nuuanu Avenue and Beretania Street — is one of the oldest such Chinatowns in the United States. The 35-acre neighborhood of Chinatown was destroyed twice by fires — first in 1886, when a restaurant quickly burned out of control, and again in 1900, when a building was set afire to contain a Bubonic plague outbreak. The fire spread and burned 38 acres in 17 days. Chinatown was rebuilt — many of the buildings date back to the early 1900s — and the community thrived in again by the 1920s. But the neighborhood fell into disrepair after World War II, becoming a center for opium and prostitution.

By the 1960s, tourism had replaced sugar and pineapples as the main industry in the islands, and Waikiki replaced Chinatown as the popular destination. However, a revitalization of the neighborhood was launched when the district was added to the National Register of Historic Places in 1973. Today, Chinatown is a vibrant mix of ethnicities and cultures, filled with trendy cafes, foodie-lover’s restaurants, artsy galleries and studios, Chinese medicine shops, and historic sites, as well as markets for fresh-daily produce, fish and flowers.

Walking tours are popular to see the oldest bars, restaurants, and historic buildings and sites. But if you want to take your own tour, here are some recommended Chinatown highlights.

Hawaii Heritage Center
Located at 1040 Smith Street, the non-profit Hawaii Heritage Center showcases Chinatown food and history via walking tours available every Wednesday and Friday, starting with an orientation at 9:30 a.m. History and cultural buffs will love this popular tour, which takes you to historic buildings, parks and gardens, food markets, shops and bakeries in Chinatown. The multicultural exhibits gallery opens at 9 a.m. Tour is 2 hours. Reservations are not required.

First Friday
In the 1980s and 1990s, the renaissance effort in Chinatown adapted many of the historic storefronts into art galleries, trendy restaurants and nightspots. By 2003, First Friday became a monthly event to showcase the area’s restoration efforts, art galleries and hip night life with live music and cocktails. Some of the regulars participating in First Friday include: Black Cat Tattoo Studio, Honolulu’s only Tattoo Parlor/Art Gallery, featuring a variety of original art, and live tattooing on First Friday’s. Also, check out the oldest bar in Honolulu, Smith’s Union Bar (19 N. Hotel Street), for an authentic Chinatown experience — and cold beer (that’s also cheap). First Friday takes place in Chinatown on the first Friday of every month from 4 p.m. to 10 p.m.

The Hawai‘i Theatre
Built in 1922 and proclaimed the “Pride of the Pacific,” the historic Hawai‘i Theatre is listed on both the State and National Registers of Historic Places. The theatre — which incorporated Byzantine, Corinthian and Moorish architecture — underwent a complete restoration and re-opened in 1996, and has since remained a popular venue for intimate concerts, stage and dance performances. Originally the home of vaudeville villans, film and motion pictures, the Hawai‘i Theatre is today recognized for its superb technical capacity and beautiful ambiance. With a seating capacity of 1,350, the Hawai‘i Theatre attracts 80,000 to 100,000 patrons a year and recent big name performers, such as Norah Jones, Mikhail Baryshnikov, Neil Sedaka, Henry Kapono, Brother Noland, Jake Shimabukuro, John Cruz and many, many others. Docent prepared tours of the theatre’s history, architecture and restoration are scheduled weekly. Call (808) 528-0506 for more information.

Wo Fat Restaurant
Besides being the namesake bad guy on Hawaii Five-0 (both the new and old TV series), Mr. Wo Fat was a baker who opened his Hotel Street restaurant in 1882. The original building burned down in the great Chinatown fire of 1886, was rebuilt and then gutted again in the fire of 1900. The current Wo Fat Building on the corner of North Hotel and Maunakea streets, was built in 1938. When the Wo Fat Restaurant closed in 2009, it was the longest continuously operating restaurant in Honolulu. The sign remains today, still adding to the flavor of Chinatown and reminiscent of times spent there. If you ate in this restaurant, it was likely on a special occasion.

ARTS at Marks Garage
The ARTS at Marks Garage is a 14-year-old artist-run, non-profit community arts center, attracting more than 45,000 visitors annually to multidisciplinary exhibits, performances, lectures, screenings and workshops. The facility features a 1,000-square-foot gallery, a 1,000-square-foot theater, and 1,000 square feet of office space. The ARTS is part of the First Friday celebration every month, as well as the seasonal Hawaii Shakespeare Festival. Monthly, on every Second Saturday, artists gather at and around The ARTS to demonstrate, exhibit and sell their work at an event called DiscoverArt. This event is an opportunity to visit and browse a wide variety of artwork — wood, paint, glass, ceramic, sculpture, jewelry, prints — and to enjoy live music and performances, from 10 a.m. to 3 p.m.

Traditional Chinese Medicine and Herbal Shops
Traditional Chinese Medicine (TCM) has evolved over thousands of years. TCM practitioners use herbal medicines and practices, such as acupuncture to treat a wide variety of issues, from fertility and allergies, to weight loss and immune system maintenance. While these herbal shops add color and are part of the cultural ambiance and history in Chinatown, TCM may or may not be safe or the right remedy for you or your symptoms.