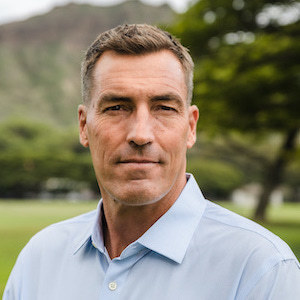 Michael Shower is an award-winning real estate powerhouse with an outstanding track record of success. Known for his for unstoppable work ethic and unfailing dependability, he's a dynamic top producer with several industry accolades to his credit, including ranking among the top 2 percent of agents globally at his last firm. Above all, Michael is a steadfast professional who consistently exceeds his personal and client goals with focus, skill and determination.

After graduating from Cal Berkeley, Michael spent 15 years traveling the world. He launched a successful business in Japan, and he credits the decade he spent as an entrepreneur with forging his persistent and industrious approach to success. Having purchased his first property in his 20s, Michael knows firsthand the importance of homeownership. He's a Designated Luxury Property Specialist and one of the only local agents with a history of successful closings across Oahu, including a record-breaking $12 million North Shore sale.

Michael has also held many roles in Hawaii's movie and film industry. He's done stunt work in various major motion pictures and television shows, including the film "Soul Surfer," the series "Lost" and recently, "Triple Frontier," a Netflix movie. Thanks to his extensive network in entertainment, Michael is one of the most connected realtors in Hawaii, with several industry clients to his credit. It's no surprise that the vast majority of his clients are loyal repeat customers and enthusiastic referrals.

Originally from California, Michael has resided in Hawaii for more than two decades. He and his wife and their four children are immersed in island living, splitting their time between Kaimuki and Makaha, where they enjoy surfing, swimming and hiking.